skip to main | skip to sidebar

You have most likely noticed a significant decrease in activity here at Rotating Coupler. That's only because the down time was necessary to complete a project that has been in the works for some time.

Many of you are probably familiar with Frank Giacobbe, author of the N Scale Modeling blog. He and I have not only been writing and sharing information with the readers of our blogs, but with each other.  We began collaborating on projects behind the scenes and found that we have surprisingly common interests in modeling -- specifically big cities in the 1940s. It was just a matter of time before we started working on a project together officially.  And that time has come.

Frank and I are very pleased to announce a brand new Web site called N Scale Limited which is dedicated to the N scale model railroader. It will have all of the same information and discussion you've been getting from our separate blogs -- just bigger and better than ever. Our individual blogs, Rotating Coupler and N Scale Modeling will be discontinued but will remain available for your convenience.

Please join us at N Scale Limited and we look forward to building a great new community of modelers there. 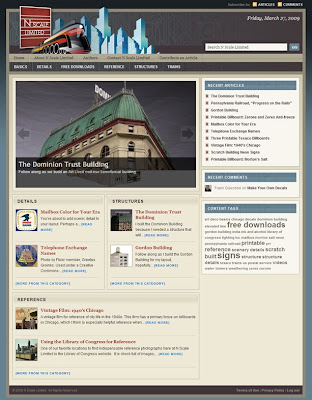 Posted by Christopher at 8:42 PM No comments:

Where have I gone to?

Hi everyone, it has been quiet around here for the past few weeks and I apologize greatly about that, but don't worry, I will make it all up to everyone very soon.  So just sit tight and be patient cause you wont see anymore posts till then, but you will like what you see.
Posted by Christopher at 8:45 PM No comments:

Dominion Building - The Results are In.

I am home from the show and I am here to tell you how the Dominion Building fared in the contest.
Results
Best of Show
1st place in Structure category
3rd in peoples choice
What really made me happy was I had competition at this show unlike the last show I entered in.  The HO victorian building was really good, it had a few minor issues, but still was a great model, a few of the other structures were good but not great.  There were a other models in different categories that were great, such as a S-scale caboose and a amazing N-scale SD70mac.  One thing that I was a little disappointed with was this wasn't a NMRA judged show, so no points unfortunately.  Also note the colors of the ribbons, Red is first and Blue is second???  When I walked up I thought I only took second but then I read the ribbon, sort of strange.  Another thing, I entered my building a day after most of the other models so I lost out on many votes, and I knew this would happen but I needed the time to touch up a few things, or maybe I am just making excuses.
Again I want to thank you guys for the input and suggestions with this building, it really helped me to build a better model.
Thank you,
Chris 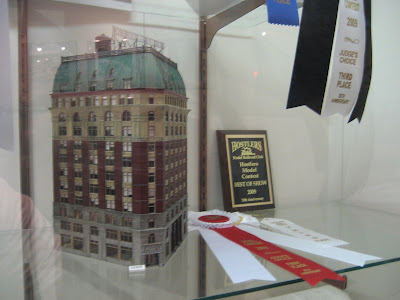 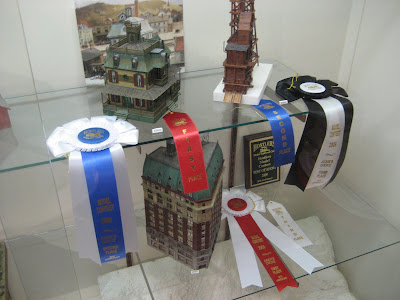 Posted by Christopher at 3:28 PM 8 comments:

Dominion Update - IT IS DONE!!!

This will be quick because I still have a few things to get ready for the show tomorrow, which actually started tonight but I don't need to enter it till noon tomorrow.  For the last week I have been rushing to finish off all the last little tasks on the building, and I just realized I knocked off a sprinkle and so I need to fix it.
I will post more into detail on the things that I did such as the Uncle Sam sign created by the sign master Frank and the smoke stack going up the back.  Also I will give a better farewell to the Dominion as well on Sunday night after I find out how I faired at the show.  Then we will finish of the Gordon and another incomplete building soon, then I will begin a few new ones.
Let me give an informal Thank You! to all of you who have been following this build, your comments, emails and support are priceless to me and mean so much, you keep me motivated.
Most of all I want to thank Frank, Jeff (my brother), and my wife for the never ending support.
Thank You,
Christopher Brimley 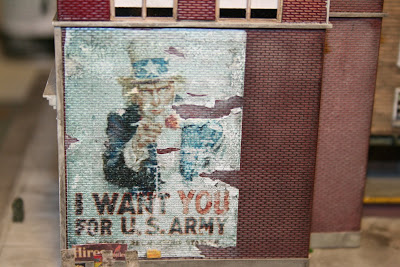 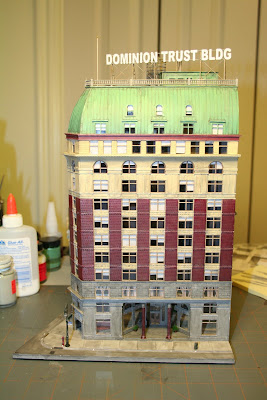 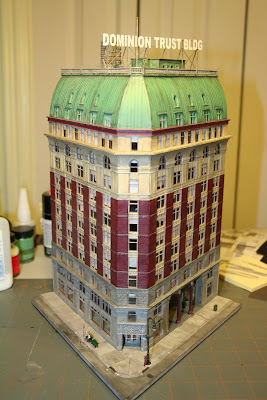 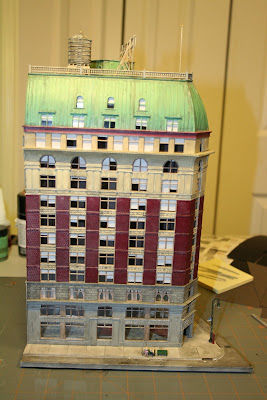 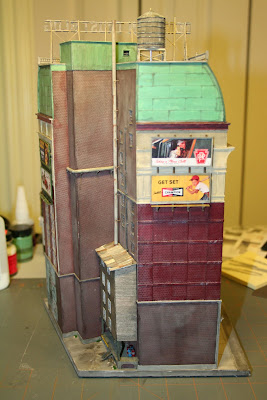 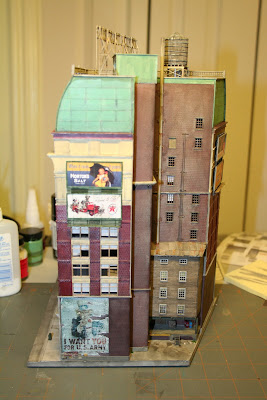 Posted by Christopher at 6:39 PM 2 comments:

As most of you know it has been rather quiet lately, going from daily Gordon posts, to almost nothing.  The reason behind this is I am hurrying to get the Dominion done for the Ogden show on Friday, I will post Thursday night if I have time on the finished building.  As I have been slaving away on it I regularly had my oldest daughter watching and asking question after question after question (she's three).  But a few days ago I was doing some painting and she was determined to help, but that wasn't going to happen, so to calm her down I told her I would get her very own building to work on and that defused the situation.
So yesterday after I came home we went to the local hobby store to pick one out.  There wasn't anything "cheap" enough in N-scale so I dug around in the HO structures and found her a little Bachman house  for five dollars.
Later that night we began work on her very own building.  Under my close supervision I let her cut the parts off of the sprues with my Xuron cutters.  Once we had all the parts removed, we began assembly.  I let her figure out what parts went next and she did a very good job with that, I then assembled it for her.  On the box in big bold letters it states NO GLUE REQUIRED,  ha what a joke, without glue it was nothing more than a rickety shanty, so I glued it up.  Today she wants to paint it, so we'll see how that goes.  On a side note, it is very strange working in HO after doing N for so long, it felt huge, and seems like it would be a cakewalk to scratch build in.
I was proud of her, with the items she did, she did a great job.  In the new issue of Nscale Railroading, there is an article by Danica Kempinski daughter of the amazing Bernie Kempinski, where she makes a very good apple orchard, so this means I can groom my daughters to build all of my trees for me, ah that will be nice:)  These are a few pictures of her working on her building and one with her and the finished building. 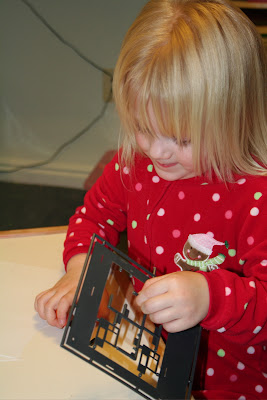 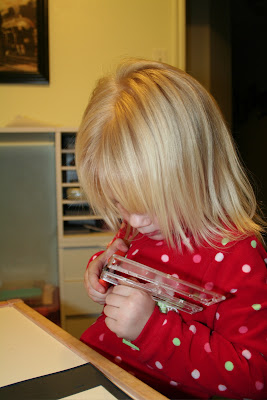 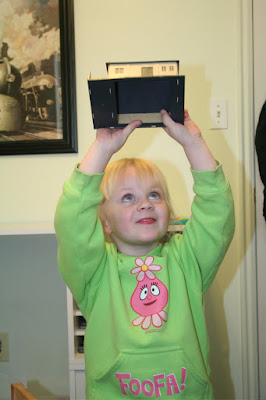 A Great Link and Free Signs to Boot.

Hi all,
I just rediscovered a website that I haven't been to in years, in is called the Triveno Circle, and is run by James A. Powell.  The layout that he has been building is in HO but ideas, styles and basic construction is generally universal in all scales, so I don't discriminate against the other scales except TT, right now it looks silly, but so did N when it first arrived.  But anyway his layout is called the Wiscsasset Trivino & Western, it is an excellent layout with many great structures.  He has a style that is a little unique, he weathers the pants off of everything and the layout has a very dark undertone.  I highly suggest checking it out.
But one of the bonuses of his site is he has many great free signs to download.  I have a few examples down below that are from his site.  I have had these signs for many years but had forgotten where I had gotten them from, you may notice on a few of my structures I have used these signs, most recently on the Gordon.  Just click on the free signs tab on his site for many more to download.  Just one note, the signs are at a high resolution so the quality is excellent, you will need to shrink them down so they will be appropriate for N-scale.
So don't just take the signs from here and his site, spend some time looking at his amazing layout and get some great ideas.
http://www.trevinocircle.net/wtw.asp 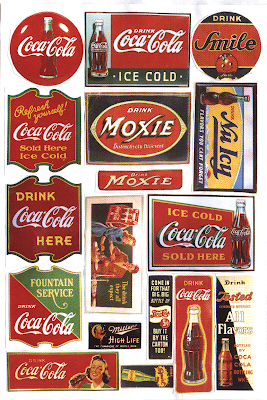 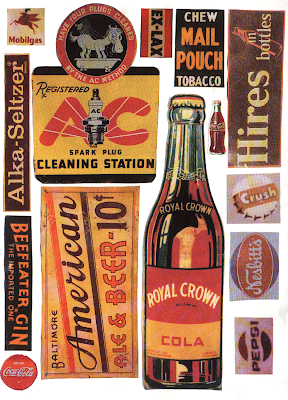 Posted by Christopher at 1:46 PM 4 comments:

I have had a number of people ask if the Gordon is based on a prototype or if it is my own design, the short answer is yes!
There have been many that I have taken ideas from, but the two main influencers are the two buildings bellow.  I don't know the names of either but I will tell you the little info that I do know.
The first I do know it resides in mid town Manhattan among the thousands of nameless mid-block mid-rises.  I initially was going to use this design at the reduced height of where the Gordon currently sits.  I decided to change it up when I found the photo of the other building and I decided to make it into a okay example of art-deco.  That building is in Europe, but I forget what country. 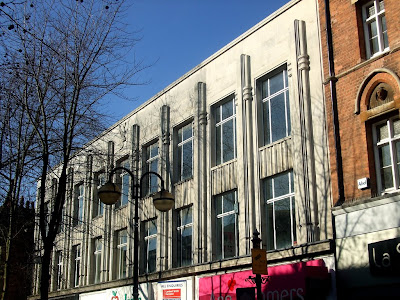 Rotating Coupler is now for archival purposes only.  All current updates by me are now done on N Scale Limited.
Thank You,
Chris